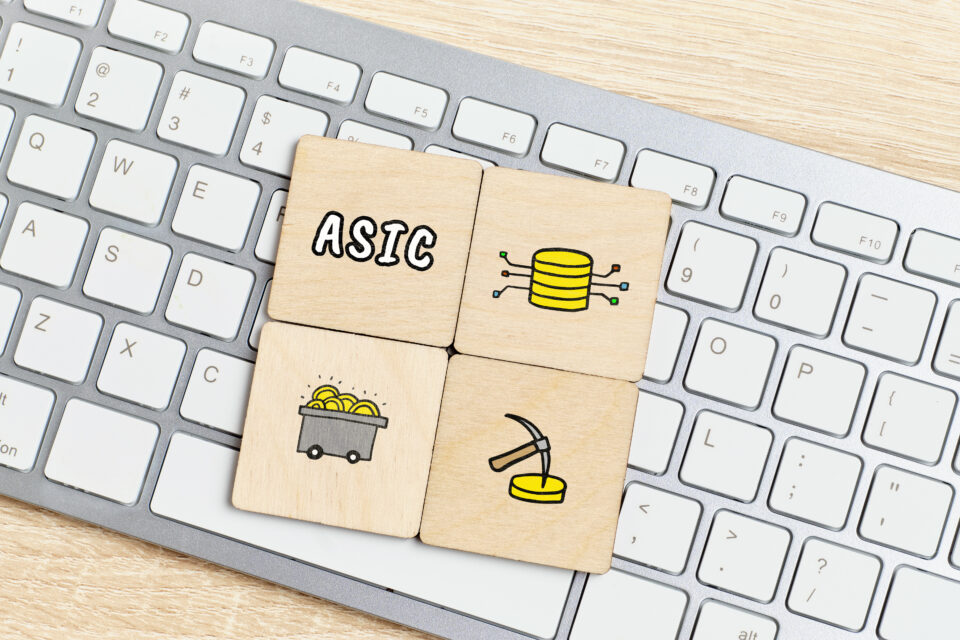 ASIC, or application-specific integrated circuit, is a microchip that has been designed to serve various purposes, such as transmission protocols. ASICs are used in the cryptocurrency realm for computing crypto puzzles to mine new cryptocurrencies like bitcoins. Since bitcoin mining needs miners to solve complex mathematical equations alongside tough computational puzzles, ASIC machines prove very efficient for it. Though, many coins in the market do not require ASIC for mining new tokens.

What Is an ASIC?

ASICs are cryptocurrency mining machines that can mine new coins quickly. Miners use ASIC to mine coins in larger quantities as it gives them an advantage over GPUs and CPUs. The efficient computing power employed by an ASIC unveils the crypto mining capability. But there are a few downsides of ASIC mining as well such as the cost associated with the ASIC device which might be difficult for the new miners to purchase. The return on investment remains highly volatile due to changing crypto algorithms that may render old ASIC designs entirely unprofitable. Furthermore, the primary beneficiaries of ASIC machines belong to Chinese firms that profit from ASIC manufacturing and distribution immensely.

What is ASIC-resistant cryptocurrency?

ASIC-resistant coins use algorithms that are resistant to ASICs. The ecosystem of such coins is built in a resistant way which disallows miners to mine coins with ASIC machines. Therefore, mining the coins with ASIC is almost impossible. Although miners may still try to mine ASIC-resistant coins with the machines, that may give them the very less return-on-investment opportunity. In fact, many networks create coins that are ASIC resistant to increase the decentralization network in the blockchain while others seek to make the mining process affordable for the larger community.

Cryptocurrencies that are ASIC-Resistant

Ethereum (ETH): one of the most popular cryptocurrencies that are resistant to ASIC is Ethereum since the network of Ethereum blockchain uses the Keccak-256 hashing algorithm. The hashes reject ASIC mining completely. The algorithm is made to produce hashes for mining purposes and no other computing aspect. Bitcoin, on the other sides completely depends on ASIC for mining new coins but the proof of work hashing algorithm in Ethereum favours GPU more which are comparatively affordable and accessible.

Ravencoin (RVN): although Ravencoin is the forked version of bitcoin, it is ASIC resistant. It used the X16R hashing algorithm initially but in the past few years, developers forked the network and switched to the KAWPOW mining process. The new function allows miners to use the memory and computing abilities of their GPUs. The new update made Ravencoin resistant to ASIC to make the coin decentralized.

Monero (XMR): like Ethereum, you do not need special machines like ASIC to mine new coins. Monero uses a private RandomX function along with the Crypto Note function that helps in producing new blocks. Monero coins can be easily mined with CPU and GPU.

Vertcoin (VTC): yet another bitcoin forked coin Vertcoin is designed to be mined from GPUs instead of ASIC machines to add security and decentralization to the bitcoin network. It is perhaps one of the most popular ASIC-resistant coins in the market which uses the Iyrar2v3 algorithm. The developers of the VTC are committed to not using the ASIC approach as they want this hard fork network to be decentralized.

Does ASIC-resistant mining reduce the threat of computing power monopoly?

Although blockchain technology is described as a decentralized technology most of the time, almost 51% of the computing power is monopolized. This leaves a large mining pool to employ small mining methods that ultimately increase their per block rate as compared to the power ratio used by ASIC boosts or other means. Although ASIC-based coins are more secure and difficult to attack, smaller cap coins remain under threat of monopoly. Thus, many blockchain networks have decided to use ASIC-resistant protocols to increase community participation. Such developers seek to lower the entry barrier and create a secure and distributed blockchain ecosystem that is accessible and fair for all.

Can ASIC-resistant coins lead to decentralization?

As ASICs are used to mine crypto, the argument over cryptocurrency centralization has intensified. As previously said, ASICs are specially created circuits that have only one purpose: to mine cryptocurrencies by giving ASIC miners enough processing power to outperform GPUs and CPUs utilized by competitors. Due to the fact that only a few companies provide a substantial amount of hash power, cryptocurrency mining has become monopolistic. Since the underlying crypto network depends on a few big mining farms to maintain the hash rate that makes the network safe, these huge mining farms not only establish a monopoly but also hold the underlying crypto network captive.

The main reason behind promoting ASIC-resistant mining is to provide every user with a chance to mine crypto and contribute equally to the hash rate. This further allows miners to work with ordinary machines and share rewards with the help of the decentralized crypto realm. When the mining power will not be limited to a few, more people will join the crypto community without spending millions to buy new ASIC.

Advantages and disadvantages of ASIC-resistant cryptocurrencies

ASIC-resistant coins are great for new and existing miners who do not have millions to spend on mining infrastructure. They can start mining with ordinary machines provided the crypto network is decentralized. If more cryptos are made ASIC resistant, they will actually serve the initial purpose behind introducing cryptocurrency i.e., creating a transparent financial environment free from monopoly. From an environmental and technological perspective, it can be said that ASIC machines require millions of kWh of electricity per day to mine coins. They also force miners to make undesirable changes to the blockchain.

Although many people oppose using ASIC machines for cryptocurrency mining, the ASIC industry seems to grow at a fast pace. There are many large players in the market who rely completely on mining with ASIC. While new coin developers continue to prevent using such machines for mining, the ASIC companies catch up with the algorithms and continue to manufacture ASIC supporting the coin network.

Is Voyager Safe: Things To Know Before You Start Using This Platform For Crypto Trading